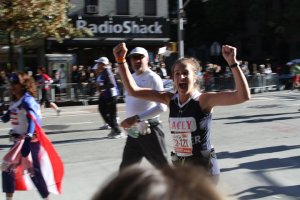 Here it is folks, NYCathy’s recap of her run in the NYC marathon. I urge you to take a  moment to read the entire thing – it’s awesome and inspiring! Almost makes me think about running a marathon…almost 😉

As I think I had mentioned, the whole reason that I signed up to do this was because I felt like my day-to-day life was lacking something. I needed a new goal to work towards and challenge myself. You know, mix things up a bit. The hardest part was definitely the training… Planning ahead and making time to fit each run in with my work schedule and social life (as well as all the weekend destination weddings!) One of the best perks was definitely the carbo-loading (believe me, I took full advantage of the daily doses of bagels & pasta).

Someone once told me that if I was to run a Marathon- definitely do it through a charity. I am so glad that I did, it helped motivate me whenever I was feeling tired or down. There was a 19 year old girl named Hayli with CF running on our team. She sent out weekly blog posts of her training process. It was really inspiring. I finally met her at our dinner the night before race day (she was from Oregon) and I totally felt like I knew her (just like I do with Pam 101!!!!)

On Marathon Sunday I met the Team at the buses at 5:15AM. It was a weird feeling, almost like the night before you were going away to college freshman year. Nerves and excitement. I had 2 friends that were also running, so it was nice to see familiar,  friendly faces that were feeling the same way as me. When we finally got to charity village it was 6am and we had 4 hours and 40 minutes to kill before our heat even started! So yes, for 4 hours and 40 minutes I checked and rechecked my water belt to make sure I had enough Gu and racing necessities (I think in total we counted that I repacked 9 times). Another perk of running for a charity is that they had a tent for us to stay warm in for those 4.5 hours. It was 38 degrees and ruper windy when we got there so I was very happy to be in the tent. Fun fact: you wear junk clothes to the start of the race- whatever you throw off in the beginning is donated to homeless shelters in NYC… whatever you throw off after the bridge is thrown out because so many people pee on the bridge!!! (Not kidding).

My toughest mile (both physically and mentally) was randomly my first 1- 3 miles. I think it was a mixture of my nerves, “the unknown” and the freezing cold. As I climbed the Verrazano Bridge all I could feel were my aches and pains. I’m not going to lie, I literally thought to myself ‘Holy shit! How the hell am I ever going to do another 25 miles!!!!’ Then, I turned to my friend Kelly and said, “I know it’s mind over matter but my Achilles tendon is killing me.” I kid you not, within seconds after the words came out of my mouth I approached the man running in front of me – who happened to be a Wounded Warrior, running the NYC Marathon with a prosthetic leg. It was definitely a reality check. I couldn’t help but immediately choke up (Not going to lie, I did this a few times throughout the day). It was at that point that I knew I needed to ignore the pain and appreciate the fact that I was able to do this and enjoy every second of it.

Between Mile 3-5 my muscles finally warmed up and I got my mojo. I kept a steady pace (didn’t want to burn out) and I just soaked up the crowd. I don’t know what moved me more- the crowd or the participants. It was amazing. Hundreds and hundreds of people stand along the streets as the route took us through each neighborhood, one completely different from the next. There were bands lining the streets, crowds of firemen, police officers, school children, etc. Subway Sandwich workers were all over the place cheering on Jared! It really felt like the whole city stopped what they were doing to come cheer on the runners. As cheesy as it sounds, I felt so proud to say I reside here. Brooklyn was lined with different bands as well as a few karaoke machines that were ear piercing yet hysterical. I was feeling great and decided to pace with my friend Kelly. We had a so much fun people watching together and motivating each other. We couldn’t stop laughing at people- so many runners were in costume! We’re talking full on chicken costumes, men in fairy outfits and armadillo suits. In total, I passed about 8 different blind runners (running with aids to guide them) it was incredible. There were men and women in their 70’s, a group of elderly nuns (wearing t-shirts that said “NUN TOO QUICK”), there were also a lot of individuals (both young and elderly) that were severely handicapped and I was amazed at how determined they were to finish. It was also really emotional. There would be a random person that would hit a wall and break down and start walking and everyone around us would cheer them back on. It was really cool. Like I said, I got teary eyed throughout the race multiple times!

I met my parents and family at Mile 17.5…. I was so happy to see them!! I met a few friends along 1st Ave at Mile 18-19 (which is where those fbook photos are from) and that’s actually right when Kelly and I separated. Unfortunately, she hit a big “wall” and had to walk. I was afraid if I stopped I wouldn’t be able to start running again (and we still had about 7 -8 miles left, uphill) so I kept truckin. My name was on my shirt so the funny thing is all of these random strangers cheer you on like they know you. It helps a lot. When I got to The Bronx, these random ladies and their kids were handing out candy and started cheering my name saying “COME ON LACEY! LETS GO MAMA. YOU GOT IT MAMA-LACEY- GURRRL” It was hysterical. Around Mile 21 my feet started to feel swollen and legs felt really heavy. A random lady was handing out bananas so I took one, thinking it would help the cramping in my legs. I was so glad I did! I housed the banana, felt 10x better and focused on seeing Skip & Marge at Point #2 before heading into Central Park for the homestretch. As soon as I saw them at Mile 23 I got a huge boost of adrenaline and my last 3 miles were my fastest! I was so excited going down the line and hugging them that I also embraced the total stranger that was in line next to them!!

One of the highlights was when I passed the Chilean Miner as soon as I entered the Park. It was a pretty neat way to finish the homestretch. I can’t believe that it’s all over, it almost feels like a blur. My first goal was to FINISH and hopefully run it in under 4:30 and I ended up running it in 4:22, so I was happy 😉 Although, I heard P. Diddy ran it in 4:15- along with 2 trainers and a nutritionist- so now I want to beat him without all the fluff! It was such an incredible experience and I truly believe that anyone can do it. I recommend it to anyone that wants to set a goal- don’t be surprised if I signup for it next year! All the training, early runs paid off to experience the race as I will never forget it. It has been nice to have a bit of my social life back- like I said, I have been binging on all of the things I neglected while training but I almost feel weird without some of the running. If you and Joey are looking to set a goal- I think this is something for you to add to your Bucket List. And if you ever have the chance, come to NYC and watch Marathon Sunday. It is unlike any other event I have ever been too and I know you would enjoy it.

PS: Cathy and I used to run through the neighborhood in our sports bras. We thought we were cool. Wait, we WERE cool!

8 thoughts on “The Letter We’ve All Been Waiting For”

In Case You Missed It…